Things You should know about: Brittney Griner’s trial 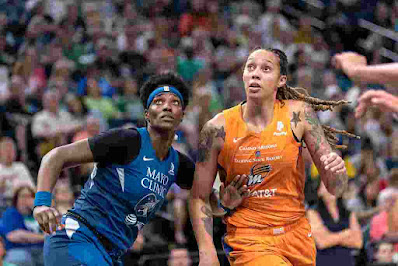 W.N.B.A. (Women’s national basketball association) icon Brittney Griner was found guilty of carrying wrongful narcotics in Russia, for which she was detained in February in Russia.

Two times Olympic gold winner and nation’s favorite W.N.B.A. start Britteny Griner who has been detained in Russia since February, now found guilty of bringing illegal drugs inside Russia and now sent to a prison camp for nine years. Tho there is a mystery that her lawyer argued in court that she didn’t take it inside with the purpose of smuggling narcotics into Russia and also said that her doctor preferred her to use cannabis in case of injuries as a painkiller.

To know all about a case, we have to look into the past

Why was Brittney Griner going to Russia?

Brittney Griner had traveled from New York to participate in Russia during her W.N.B.A. off-season. (Many players, like her Phoenix Mercury colleague Diana Taurasi, spend the winter in Russia to make more money.) Most of the W.N.B.A. players participated in the other countries league for commercial purposes. She was first caught on February 17 at Sheremetyevo International Airport near Moscow for a charge of carrying vape cartridges including cannabis oil. While hearing Brittney Griner told the Russian court she “had no intention to break any law”.

What drugs did Brittney have in Russia?

The iconic player from the Pheonix Mercury team Brittney Griner was detained on February 17 in charge of vape cartridges including cannabis/hashish oil with her and sentenced to guilty for nine years and sent to a penal colony. For this, she charged around 1 million rubles ($16,590). The Prosecutor said that a total of 0.702 grams of cannabis was found with her while checking at Sheremetyevo International Airport. In Russia law regarding

Two-time Olympic gold medal winner and women’s national basketball association icon was sentenced to jail for 9 years last month in Russia in charge of carrying vape cartridges and cannabis oil of some grams. Where in Russia Laws regarding narcotics are very stringent. From February 17 to till she has been in the custody of Russian police and was recently sentenced to 9 years of jail. Still, the lawyer Maria Blagovolina appeal to the court to lower the sentence.

How many vape cartridges did Griner have

While Checking at Sheremetyevo International Airport, Brittney Griner was caught with two vape cartridges with cannabis content in it.

Are vape cartridges illegal in russia

The use of Cannabis is illegal in Russia. Two grams of hashish is considered an administrative offense. But in the case of Griner amount is 0.702 grams but important is she is not a Russian national so it became a matter of international. As President Biden Personally look into it at gave assurance to her family to get her back. while this all situation Britteny missed her family, she said to a journalist.

An American professional basketball star player Brittney Griner has a net worth of around $5 million. Her salary in the W.N.B.A. is $227,000 which is the highest for annum. She plays even outside for commercial purposes in off-season W.N.B.A. where her net worth increases. Her estimated salary for the annum is around $107 thousand. She also plays for Pheonix Mercury Team

Brittney Griner is married and her partner’s name is Glory Johnson. She is also a basketball player. Brittney Griner’s Wife’s height is 192 cm.

Is Brittney Griner a guy

Many have confusion or can say curious about her gender. She is a lesbian who came out on February 11th, 2013.